TLC’s 7 Little Johnstons is back for a new season. During the first episode, Amber’s weight loss did not go unnoticed by viewers.

Now at its tenth season, the series follows the Johnston family, known for being the world’s largest known family of achondroplasia dwarfs.

Housewife Amber Johnston is the mother of the family, to two biological children Jonah and Elizabeth, and adopted children Anna, Alex and Emma. 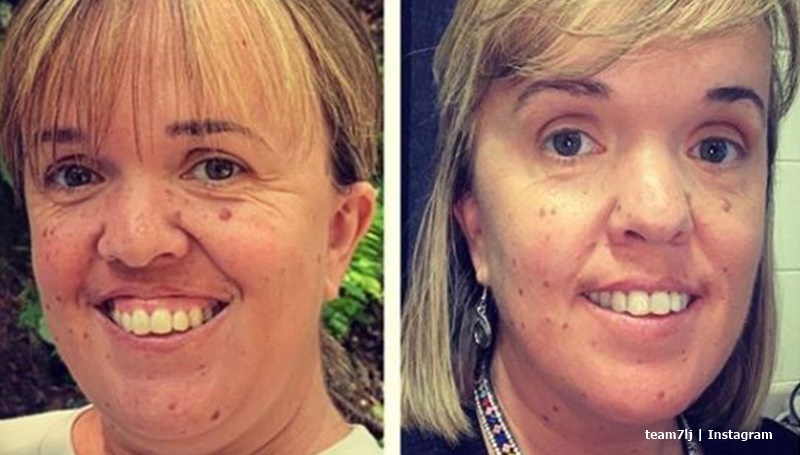 Since the very first season, fans have watched Amber’s inspirational body transformation. We compared older pics to latest images to see the change.

How much weight has Amber lost?
Amber has dropped 53 pounds, which she revealed in May 2021.

Ever since, it looks like she has continued to lose weight. Since season 10 began airing on our screens, viewers noticed the lesser pounds even more.

She revealed on the 7 Little Johnstons Instagram stories that her new habits are basically a completely different lifestyle, of “eating, living, and being”.

Amber has been documenting her weight loss ever since she physically struggled to climb a rock wall. Six months later, she could do it all okay!

Having lost 44 pounds in January 2021, Amber has kept losing weight ever since, which is more evident on 7 Little Johnstons season ten.

She’s been going to bungee fitness classes to help her fitness journey!

The TLC star’s jawline and body was not as prominent as it appears today, but her personality (which is what matters) has always shined through!

Having upheld her strong personality throughout the seasons, her recent weight loss journey appears to have made Amber a lot happier.

Sharing her process while dropping the pounds, viewers have noticed her rapid weight loss over the last year- and it’s been an inspirational story.