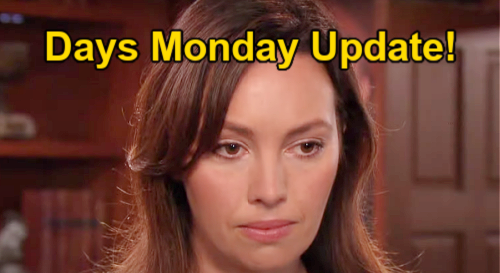 In the DiMera crypt, Days spoilers say the devil will continue to take on the form of Eileen Davidson’s Kristen DiMera.

Kristen will do everything in her power to break John Black’s (Drake Hogestyn) willpower and convince him to betray Marlena Evans (Deidre Hall).

Of course, John’s love for Marlena is far stronger than anything the devil could throw at him, so this plan seems destined to fail.

Meanwhile, the real Kristen will offer some shocking updates to Gwen and use them to get what she wants. Kristen still has an ace in the hole since she’s keeping Sarah stashed on a deserted island.

Days spoilers say Kristen will taunt Gwen about Xander Cook Kiriakis’ (Paul Telfer) deep love for Sarah and how much he wanted to marry her.

Kristen is the only reason that wedding didn’t happen, so she’ll think Gwen has a good reason to be concerned.

Kristen’s terms will be simple: either Gwen’s going to help her escape or she’s going to destroy Gwen’s relationship with Xander. All it would take is for Kristen to reveal the truth about Sarah’s time in captivity.

Gwen won’t trust that Xander’s feelings for her are strong enough to make him choose her over Sarah. Although Gwen will wrestle with what to do, she’ll eventually surrender and start plotting Kristen’s getaway.

That’ll involve some transport van trickery – and it looks like Ava Vitali (Tamara Braun) will get dragged into this mess as well.

Over with Maggie Kiriakis (Suzanne Rogers), she’ll welcome Xander for a visit and wonder what he has on his mind.

Xander will probably be thinking about Sarah and might quiz Maggie about how to get in touch with her. That could lead to Maggie admitting she hasn’t talked to Sarah in quite some time.

At some point, Maggie and Xander will surely realize something isn’t right. Sarah isn’t off living happily after with Rex Brady (Kyle Lowder) like Kristen wanted everybody to believe.

Xander and Maggie may do some digging down the road, but Monday could also bring a conversation about Xander’s new realization that he loves Gwen.

Maggie may be glad Xander’s found happiness since she knows how heartbroken he was over losing Sarah.

Kristen was wearing a Sarah mask when she blew Xander’s world to smithereens, so that’s a shocker that’ll come out sooner or later.

Speaking of shockers, Nicole will make an admission to EJ – and it seems likely it’ll involve that conference table hookup at Basic Black.

Nicole may come clean about getting hot and heavy with Rafe Hernandez (Galen Gering), but EJ will think she needs to focus on him instead.

EJ won’t hesitate to show Nicole another steamy good time, so that’ll distract Nicole and help her see that she’s got some real options.

Days of Our Lives spoilers say Sami Brady DiMera (Alison Sweeney) will soon get back in the mix for November sweeps, so things are about to get messy!