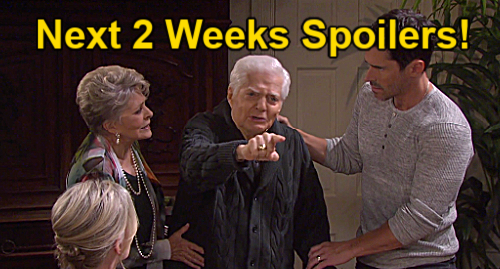 Days of Our Lives (DOOL) spoilers for the next two weeks, November 22 to December 3, tease that Brady Black (Eric Martsolf) will get attacked while Sami Brady DiMera (Alison Sweeney) makes an escape attempt. DOOL viewers will also see a mystery hiker surprise while Kristen DiMera (Stacy Haiduk) flees with the help of two accomplices.

During the week of November 22-26, there’ll be some shocking Thanksgiving celebrations. Once Doug Williams (Bill Hayes) scores a holiday visit with his loved ones, Marlena Evans (Deidre Hall) will do her best to wreck it.

Possessed Marlena will want to pull Doug out of the celebration and take him back to Bayview, but he’ll call her the devil – and Julie will insist he’s not going anywhere!

There’ll also be some drama erupting on the DiMera premises once Steve Johnson (Stephen Nichols) cracks open the crypt.

In an effort to wiggle out of the devil’s ultimatum, Susan Banks (Stacy Haiduk) will resort to drastic measures.

It’ll be Susan’s way of saving both John Black (Drake Hogestyn) and EJ DiMera’s (Dan Feuerriegel) lives, but Steve’s arrival should be a game-changer.

This will lead to word spreading about the devil reentering Marlena’s body, so possessed Marlena will have to think fast.

That’ll be followed by even more excitement during the week of November 29-December 3.

Days spoilers say Brady will suffer a brutal attack, but who will be the culprit? Would Philip Kiriakis (Jay Kenneth Johnson) really sink that low?

Regardless, there’s a good chance Philip’s going to get blamed for it – especially if Gabi Hernandez DiMera (Camila Banus) and Jake DiMera (Brandon Barash) come forward with the threatening email they have.

Philip seemed ready to kill Brady in that message, so he may land in some hot water.

In the meantime, Philip will try to trick Chloe Lane (Nadia Bjorlin) into confessing an affair she never had. Since Philip only overheard part of the conversation, he’s got the wrong idea.

Chloe is bound to get confused over Philip’s behavior, but he’ll continue to seethe and will eventually put her to the test again.

Kristen will be ready to escape and will pressure Gwen to help unless she wants the Sarah Horton (last played by Linsey Godfrey) island secret exposed.

Ava helped Kristen with her previous escape, so Kristen may threaten to blab that unless she helps, too.

One way or another, Gwen and Ava will reluctantly become allies. They’ll work on a getaway plan involving the prison transport van, and AJ McLean from the Backstreet Boys will play the driver.

However, Days spoilers say Xander Cook Kiriakis (Paul Telfer) will discover something shocking, so it seems he may find out the truth about Sarah anyway – leaving Gwen’s hard work all for naught! F

rom there, Gwen will just have to make sure Xander doesn’t find out how she tried to hide the truth.

While on a secluded trip with possessed Marlena, Ciara Brady Weston (Victoria Konefal) will grow suspicious and relay her fears to Ben Weston (Robert Scott Wilson).

A mystery hiker will come along at the perfect time, so that may be Gabe (Mark Colson) the guardian angel from the original possession story.

At an undisclosed location, Sami will plot her escape and most likely fail miserably.

Sami will be frustrated since she won’t know who’s behind her snatching or why she’s been kept locked up all this time.

Sami will try to find out who ordered her abduction, but the man hired to guard her may not spill much.

There have been some hints on the show that suggest EJ DiMera (Dan Feurreigel ) might be teaching Sami a lesson, but other spoilers seem to contradict that info. It’s a complex situation, so we’ll see who the real captor is down the road.

After John rests up in the hospital following his crypt crisis, he’ll be determined to track Marlena down.

That’ll bring a dangerous new adventure, so Days fans won’t want to miss all the action.

Days of Our Lives spoilers say possessed Marlena will land in some extremely tight spots, so stay tuned to DOOL.