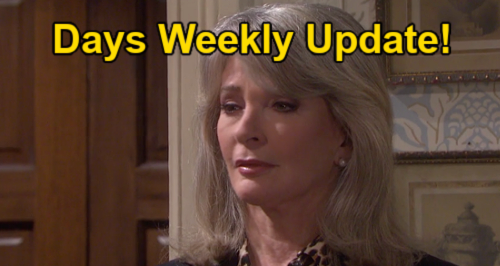 Days of Our Lives (DOOL) spoilers update for the week of November 22-26 teases that John Black (Drake Hogestyn) and Susan Banks (Stacy Haiduk) will be rushed to the hospital while Marlena Evans’ (Deidre Hall) secret spills. Johnny DiMera (Carson Boatman) will also have a proposal for Chanel Dupree (Raven Bowens) to consider, so here’s what Days fans can expect.

That’s a sensitive topic for Rafe since he’s trying to hide the conference table hookup he had with Nicole on Halloween night.

Rafe will cover his blunder, but he’ll have to defend his decision to take Ava back.

Gabi Hernandez DiMera (Camila Banus) will have a big problem with Rafe giving Ava chance after chance. Of course, guilt can be a powerful motivator to make things work!

That’s especially true in this case since Rafe doesn’t think Nicole is an option.

Nicole pushed Rafe away and will continue to do so, but that’ll work out well for EJ DiMera (Dan Feuerriegel). EJ will happily use this opportunity to support Nicole and try to pull her closer.

As for Sami Brady DiMera (Alison Sweeney), she’ll realize Marlena won’t be able to help her right now. Sami can’t help Marlena either, so they may briefly commiserate over their snatchings and hang up.

Days spoilers say Sami will reach out to EJ next, but that attempt to score help won’t go as well as she hopes either.

Next, Johnny will make Chanel a tempting offer. He’ll have a romantic proposition that could affect Chanel’s future, so it sounds like he’ll ask her to move in.

After Chanel has an epic blowup with Paulina Price (Jackée Harry), Chanel might decide moving in the DiMera mansion sounds like a pretty good idea.

Paulina and Olivia Price (Marla Gibbs) will also have a major showdown about the wedding drama. Olivia will rant about Paulina’s decision to blab to Marlena, who then blabbed to Chanel.

Paulina will realize Marlena is indeed the only one who could’ve confessed Lani Price-Grant’s (Sal Stowers) true parentage.

Paulina will get a chance to rip into Marlena sooner or later, but the devil will like the fact that he’s caused so much turmoil. Meanwhile, Doug Williams (Bill Hayes) will head back to the Horton house for a Thanksgiving visit.

Julie will try to get Doug talking and singing like the good old days, but he’ll be quiet and lethargic from his medication. However, DOOL spoilers say Doug will find both his voice and his strength when possessed Marlena crashes the party.

Doug will point the finger at the devil in the dining room and hope he’s believed.

Next, Susan will come up with a creative strategy to avoid killing John. Possessed Marlena will demand that fatal outcome unless Susan wants EJ dead instead.

Susan won’t want anyone to die at all, so she’ll make a shocking move just before Steve Johnson (Stephen Nichols) follows a clue to the crypt.

The National Dog Show will bring a preemption on Thursday, November 25, but the show will pick the action back up on Friday, November 26.

That’s when Steve will work to rescue John, who’ll ultimately have to be hospitalized.

As for Susan, she’ll make a big scene and alert everyone to trouble at the DiMera mansion.

EJ will visit his mother after she lands in the hospital later – and Tony DiMera (Thaao Penghlis) as well as Anna DiMera (Leann Hunley) will reel over Marlena being possessed again.

The possession news will spread like wildfire, but Marlena will get to Ben Weston (Robert Scott Wilson) and Ciara Brady Weston (Victoria Konefal) before they learn the truth.

Possessed Marlena will eventually dupe the happy couple into taking a trip with her, so Ciara and Ben have no idea what they’ll be getting themselves into!

Days of Our Lives spoilers say Marlena will cling to her twisted plans for Ben and Ciara’s baby, so stay tuned to DOOL.