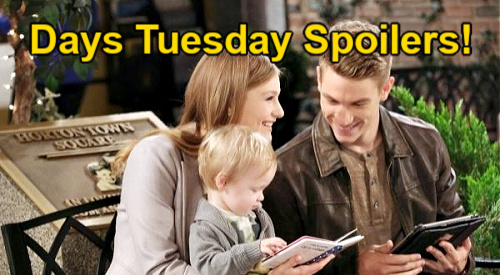 For starters, we should note that Tuesday’s DOOL episode will kick off Thanksgiving Day in Salem. The holiday festivities will begin around town – starting with a major ruling that’ll affect Doug’s holiday plans.

Belle will pull off an exciting victory involving Doug’s power of attorney, so this will lead to Julie Williams (Susan Seaforth Hayes) taking Doug home for a Thanksgiving visit.

The only problem is Doug won’t be able to communicate about Marlena’s possession since he’ll still be so drugged up and out of it.

Doug will have more luck sharing his side of the story later this week once the drugs have worn off. In the meantime, Marlena will face plenty of questions from Steve Johnson (Stephen Nichols) and Kayla Johnson (Mary Beth Evans).

Marlena will be put on the hot seat since no one else has heard a thing about John’s so-called mission.

John is actually in the DiMera crypt, where Marlena intends to kill him along with Susan Banks (Stacy Haiduk).

Days spoilers say possessed Marlena will do her best to throw Kayla and Steve off the trail, but it won’t be easy.

There’ll be questions about Doug’s ordeal during this grilling session as well. The more Steve and Kayla talk to Marlena, the more suspicious they’ll be of her new attitude and bizarre behavior.

At one point, Marlena will grip her knife and mull over whatever twisted move she has in store next.

No one is safe as long as Marlena’s possessed and roaming around town, but she thankfully won’t have a chance to do anything too gruesome.

Over with Johnny, he’ll have a romantic proposal for Chanel to consider. Johnny will bask in the afterglow while in bed with Chanel, who’ll perhaps worry about Thanksgiving now that her family has fallen apart.

Perhaps Johnny will want to whisk Chanel away on a trip since it doesn’t look like he’ll spend Thanksgiving with his family either. Johnny may also offer Chanel a place to live since there’s plenty of room at the DiMera mansion.

Whatever the case, Chanel should be touched by Johnny’s kindness and devotion to her as they deepen their relationship.

“Big Mama” will be furious with Paulina for blabbing to Marlena and will assume the shrink caused all the wedding mayhem through Chanel.

Paulina will face Olivia’s outburst, but she’ll no doubt deliver one of her own since Olivia pressured her to give up Lani Price-Grant (Sal Stowers) in the first place.

Days of Our Lives spoilers say Paulina has much more family drama in her future, so stick with DOOL.