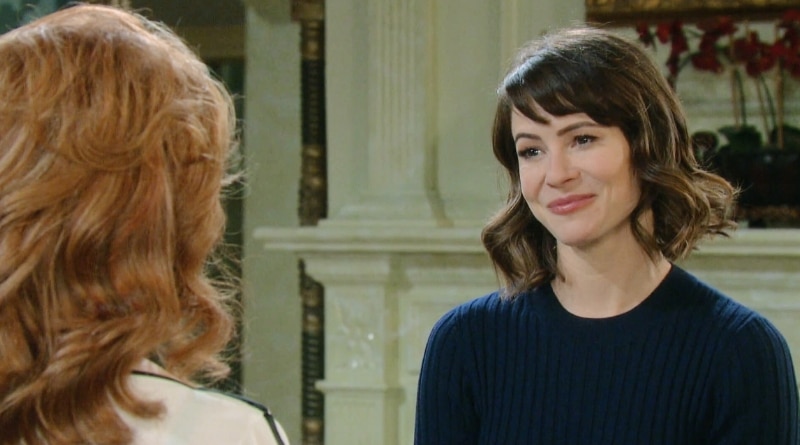 The latest Days of Our Lives spoilers suggest that another familiar face might pop back up on Salem soon. This will be Linsey Godfrey, who plays the character of Sarah Horton in the soap opera. She has been missing ever since Kristen DiMera kidnapped her and is keeping her hostage in the DiMera island. However, now, she might be on her way back.

Days of Our Lives spoilers for the week of November 29- December 3, 2021, suggests that Kristen will start blackmailing Gwen into helping her. Kristen will want to escape prison, and she threatened that she would tell Xander about Sarah’s whereabouts if Gwen didn’t help her.

However, that isn’t all. Spoilers also claim that Xander will come to know something shocking in the upcoming week. So, there is a possibility that regardless of Gwen helps Kristen or not, Xander might come to know about Sarah’s whereabouts, and he might start a search for her. There has been a lot of talks about Sarah’s comeback lately. So, it will all point to the fact that she might be returning.

While we speculate Sarah Horton’s comeback, Soap Opera Spy has more hints. They point towards a selfie Mary Beth (Kayla Johnson) and Stephen (Steve Johnson) recently posted. While this was a video of the two wishing everyone Thanksgiving, Soap opera spy points that viewers can see a brunette in a face mask lurking in the background. So, could this be Lindsey Godfrey? She does look like her, and there is a possibility that she might have come back on the sets to reprise her role.

Days of Our Lives has not yet confirmed anything officially, but if we take into account all the hints that the show and the actors are dropping, we can expect Lindsey to come back sooner than later. What do you think will happen when she comes back?

One thing we know is that she might become a problem between Gwen and Xander. When Xander comes to know that Sarah never really dumped him, will he want to reconnect with her? If that happens, where would it leave Gwen? We will have to wait to know. Sarah’s comeback will be an interesting one, and it will shake everything up. So, stay tuned.