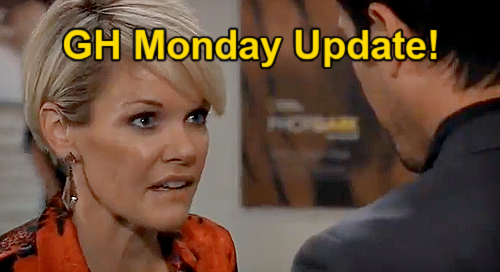 At The Savoy, Curtis will be livid over “Marshall” (Robert Gossett) the mystery man and whatever his game is. Curtis will put this guy on full blast for approaching the people he loves and trying to gain some kind of mob foothold at the nightclub.

General Hospital spoilers say Curtis will demand answers, but he won’t count on the ones he’s about to get!

A revelation’s coming up that’ll turn Curtis’ world upside down, so it sounds like this mystery man is the father who never came home one day.

That was how Curtis told the story of his supposedly dead dad, but “Marshall” is likely Curtis’ father and perhaps abandoned his family for a life in the mob.

Whatever the case, Curtis will be left reeling once “Marshall” reveals his true identity and explains why he’s reaching out now.

As he sits in jail, Victor Cassadine (Charles Shaughnessy) will be taken aback when Scott Baldwin (Kin Shriner) shows up.

Since Victor had Scott thrown out of an airplane, he’s about the last person Victor ever expected to help him.

However, Scott will point out they have something in common since he loves Liesl Obrecht (Kathleen Gati) and Victor’s obsessed with her. Victor got Liesl into her current jam, so Scott will expect Victor to get her out of it, too.

Scott will insist he can scheme his way into scoring an immunity deal for Victor. He’ll have faith in his ability as a legal shark, but he’ll obviously battle some trust issues when it comes to Victor.

Even so, Victor is Scott’s best shot at getting Liesl back – and Scott is Victor’s best shot at freedom. They’ll cautiously enter a mutually beneficial partnership, so Scott will make sure Victor walks out of lockup as a free man.

Before Robert Scorpio (Tristan Rogers) gets updates on Scott’s latest plan, he’ll have a different one he wants to try.

Robert will make a suggestion, so we’ll see if this ties in with Valentin Cassadine (James Patrick Stuart) threatening a hospitalized guard from the compound in Greece.

Valentin will indeed approach the guy and threaten him with a syringe full of air, which could kill him by sending a bubble to the heart or brain.

The goal will be to get info on Peter August (Wes Ramsey) and his whereabouts, but the guard may feel like he’ll die anyway if he rats Peter out.

This guard might even call Valentin’s bluff – and Valentin may be too soft to actually murder him since he’s more of a sweet family man these days. Valentin is all bark and no bite lately!

Regardless, Valentin will eventually discuss his concerns about making a deal with the devil.

Valentin will fret to Anna Devane (Finola Hughes) about having to surrender to Victor’s demands, but it won’t be long until Robert shocks them both with the news of Victor’s confirmed immunity deal.

Over with Esme Prince (Avery Kristen Pohl), she’ll prove she’s a troublemaker once again and try to cause a little drama at the new exhibit’s grand opening.

Ava Jerome Cassadine (Maura West) warned Esme she’d be sorry if she blew her second chance, but she just might be poised to do just that.

Nikolas Cassadine (Marcus Coloma) may have more of a “teens will be teens” attitude, but Ava won’t be as forgiving if Esme pushes her too far.

Meanwhile, Trina Robinson (Sydney Mikayla) will lean on Portia Robinson (Brook Kerr) for support after all the draining Esme sparring. It’ll serve as a good way to recharge since this sure to be a big night for Trina.

It turns out it’ll be a big night for Gladys as well since she’ll accept a surprise invitation to this exhibit opening. Brando Corbin (Johnny Wactor) will push Gladys to come since she’s feeling rather down in the dumps.

Sasha will agree and suggest they can all have fun, but some shockers are brewing once they hit the gallery.

It looks like Sasha may officially go into labor on Tuesday, so Monday may bring some initial pains and set up the risky situation.

Gladys will recognize “Paulie” aka Kip when she crosses paths with him. Kip will be working as a waiter for this catered event, so that alone will serve as a red flag. However, the real issue will come when a fellow waiter congratulates Kip on a new role.

Kip will go from understudy to key player in a production, so it’ll alert Gladys to the act that he’s actually an actor. As you can imagine, that’ll leave Gladys furious and ready to confront Brook Lynn Quartermaine (Amanda Setton).

Of course, Gladys will have to get in line since Brook Lynn is already facing questions and concerns from Harrison Chase (Josh Swickard). It seems Brook Lynn will divulge fake “Paulie” father tale and push Chase to just leave things as they are.

Valentin is a proud papa, so Brook Lynn may wonder why Chase wants to rock the boat. Still, Chase knows Brook Lynn awfully well by now.

Chase will be able to tell he’s not getting the real version of events and will keep trying to solve this baby mystery.

GH spoilers say Chase is on the verge of figuring out “Bailey Quartermaine” (Harper and Scarlett Bloom) is actually Louise August, so that’ll kick off a new phase of the story later in the week, November 15-19.