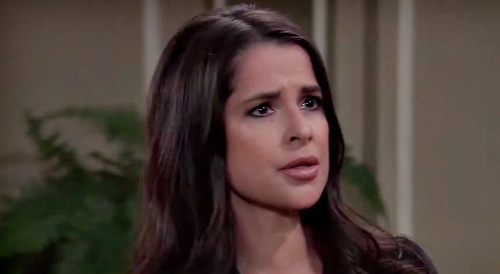 Drew has been focused on getting home to Scout during time in captivity, but he had a vision of Sam as well.

Sam was right by Scout’s side back when Drew was hallucinating, so it seemed like an interesting writing choice to include her.

Of course, Drew has been concentrating on his daughter in his dialogue, but that may be because he didn’t think Sam was interested romantically anymore.

Now that Sam has split from Jason Morgan (Steve Burton), it opens up a world of new possibilities to Drew.

It’s true that Sam and Dante Falconeri (Dominic Zamprogna) have been falling for each other, but that relationship is never going to be as rich and deep as “JaSam.”

Sam had a powerful history with Jason, but her desire to break free from all the mob danger drove them apart.

Dante will still serve as competition if Drew wants to reunite with Sam romantically, but he could be a pretty easy rival to conquer.

Things are still new for “Sante” and they don’t share children, so Drew could make a play for Sam’s heart and stand a chance of winning.

Sam and Drew’s relationship feels unresolved in many ways, so Drew’s Port Charles comeback offers a chance at a new chapter – especially if Scout starts rooting for her parents to be a couple.

Since Sam promised to help Drew adjust to his life in PC again, she should keep that promise and grow closer to him in the process.

Spending time together could certainly reignite some old sparks and make Sam wonder if Drew’s the man she belongs with.

GH intends to let Dante and Sam’s romance play out for a while longer, but an obstacle’s bound to land in their path eventually – and that obstacle could be Drew!

How will Sam feel once Drew reunites with Scout? Will that reconnection between a devoted dad and his daughter tug at Sam’s heart strings?

Could Sam and Drew ultimately come together as a united ‘DreAm’ family with Scout? We’ll deliver updates as other GH news rolls in.