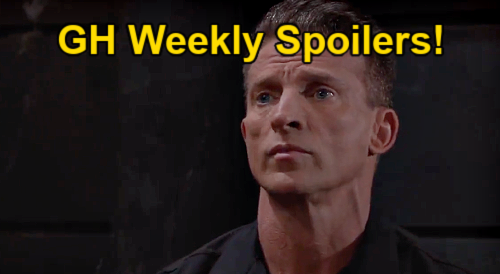 After Chase offers to serve as a fake fill-in “baby daddy,” a new plan will form with Brook Lynn. Chase and Brook Lynn will do whatever it takes to protect “Bailey Quartermaine” aka Louise August (Harper and Scarlett Bloom).

In the meantime, it looks like there’ll be some trouble following the birth of Brando Corbin (Johnny Wactor) and Sasha Gilmore’s (Sofia Mattsson) son.

Sasha and Brando’s baby could easily face some health woes since Elizabeth Baldwin (Rebecca Herbst) will battle concerns before Maxie lends her support.

Maxie will be there for Brando – and soon after, Sasha will get a surprise visitor. That might be Nina Reeves (Cynthia Watros) or someone else coming to comfort her.

Jason may manage to deactivate Drew, but Peter August (Wes Ramsey) will remain determined to ᴋɪʟʟ Jason no matter what. After Jason’s terrible situation escalates, other characters on the island will await updates.

Drew might have to take the lead on a search for Jason, but it looks like we’re looking at a presumed ᴅᴇᴀᴛʜ exit here.

Back in Port Charles, Jax will also depart after one last encounter with Carly Corinthos (Laura Wright). Jax may let Carly know he’s decided to head back to Australia since that’s the easiest exit route for him.

Next, Carly and Sonny will try to bury the hatchet when it comes to Gladys Corbin (Bonnie Burroughs).

There’s no better time than Thanksgiving – and that’ll bring a celebration for Dante Falconeri (Dominic Zamprogna) and Sam McCall (Kelly Monaco) as well. Sam and Dante will grow closer during their first Thanksgiving as a romantic duo.

Back with Brook Lynn, she’ll have her work cut out for her as she tries to spin a new faux father story to Ned Quartermaine (Wally Kurth).

Chase will also be tasked with trying to explain the bogus paternity news to a confused Hamilton Finn (Michael Easton), so stay tuned for some fun scenes.

Meanwhile, Curtis Ashford (Donnell Turner) will confide in Portia Robinson (Brook Kerr), who’ll be stunned to learn the father he thought was ᴅᴇᴀᴅ is actually alive.

Curtis will tell Portia about his faceoff with Marshall Ashford (Robert Gossett) and could perhaps get some helpful advice.

Across town, Olivia Quartermaine (Lisa LoCicero) will find Austin Gatlin Holt (Roger Howarth) so she can admit she was wrong.

Olivia will be sorry for how she treated Austin since Leo Falconeri (Easton Rocket Sweda) clearly needs help from a specialist.

Austin may understand that Olivia was being protective of her son. Olivia didn’t handle things correctly, but she was acting from a place of fear, love and concern rather than malice.

However, Austin may assure Olivia that he’s always had Leo’s best interests at heart.

We wouldn’t be surprised if Austin eventually revealed that he’s also on the spectrum, but we’ll see how this discussion plays out.

The Thanksgiving parade will also get underway as the show kicks off their usual celebrations.

There’ll be a repeat on Thursday, November 25 – and look for GH to be preempted on Friday, November 26. The action will pick right back up with more Thanksgiving drama once Monday, November 29, rolls around, so keep watching!