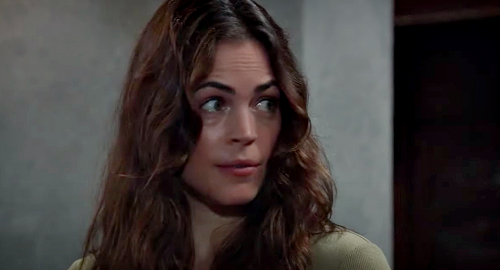 For starters, we should acknowledge that Britt isn’t Carly’s favorite person.

Carly at least gets along better with Britt than some other Port Charles residents like Nina Reeves (Cynthia Watros), but that doesn’t mean she’s friendly with her.

Carly snarked about Britt taking Jason away from them when they went on this trip to Cassadine Island and will likely point the finger at Britt once she comes back without him.

Since Carly tends to play the blame game in situations like this, it seems likely Carly will hold Britt responsible for Jason’s deadly fate.

GH spoilers suggest that death may be a presumed one, but there are still going to be some sad Jason lovers around PC – especially Carly.

Jason was Carly’s best friend, though things were a tad strained between them due to Sonny Corinthos (Maurice Benard) when Jason left.

Sonny has done his best to be understanding about the marriage that became real between Jason and Carly, but it’s been tough.

Carly’s been worried about her friendship with Jason not being the same and hinted to Diane Miller (Carolyn Hennesy) about keeping her distance for a while.

Of course, Carly couldn’t have imagined the potentially permanent distance that was coming.

It’ll break Carly’s heart once she receives updates on Jason’s terrible outcome. Carly will feel like she’s never going to have a chance to make things truly right with Jason, so she’ll be looking for someone to blame.

Britt should be an easy target when Carly finally faces her for the first time since Britt left town.

That encounter is set to happen on December 1, so that may be when Carly unloads her misplaced rage. Carly may chew Britt out for involving Jason in a dangerous problem that wasn’t his to solve.

Jason definitely wanted to help Britt find Liesl Obrecht (Kathleen Gati) and knew the risks, so it’s not Britt’s fault that Peter August (Wes Ramsey) is a vindictive nightmare of a person.

Nevertheless, Carly may rip into Britt anyway as she deals with the weight of her sadness over losing Jason.

General Hospital spoilers say Carly will struggle once she realizes Jason isn’t coming home, so Britt may bear the brunt of her anger early on.