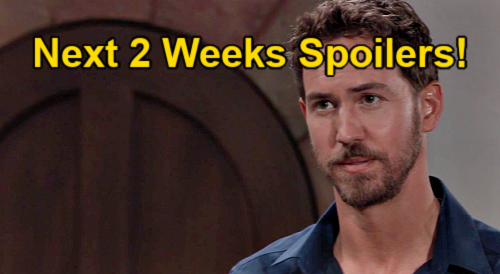 During the week of November 22-29, Jason won’t make it off Cassadine Island alive.

Jason’s presumed death in the tunnel collapse will leave Britt Westbourne (Kelly Thiebaud) heartbroken since she roped him into this mission to help Liesl Obrecht (Kathleen Gati).

Peter will apparently give Anna Devane (Finola Hughes) and Robert Scorpio (Tristan Rogers) the slip once they show up on the island as well.

The only good part of all this is that Drew will finally be free to return home once he emerges from the rubble.

In the meantime, Sasha Gilmore (Sofia Mattsson) will be in danger of bleeding out right on the operating room table.

Brando Corbin (Johnny Wactor) will come to realize just how much Sasha matters to him as she fights for her life.

Harrison Chase (Josh Swickard) will do his best to make Valentin Cassadine (James Patrick Stuart) believe that he’s the father of Brook Lynn Quartermaine’s (Amanda Setton) baby, which isn’t really her baby at all!

Nevertheless, Chase will lie about DNA evidence and hope Valentin will let this go.

Jasper “Jax” Jacks (Ingo Rademacher) will make a speedy exit out of Port Charles after telling Carly where he’s headed. Back to Australia is the most logical answer, but we’ll see exactly what Jax has in mind.

Due to Gladys Corbin’s (Bonnie Burroughs) grandbaby drama and everything she’s dealt with lately, Carly and Sonny Corinthos (Maurice Benard) will decide to call a truce.

That could mean inviting Gladys over for a Thanksgiving feast and making her feel welcome for once.

Sasha will also get a visitor she wasn’t expecting, so we’ll see if that might be Nina Reeves (Cynthia Watros) or someone else.

That obviously means Sasha will pull through her medical crisis, but she’ll remain on edge over her baby’s health woes.

Sam McCall (Kelly Monaco) will have a very couple-y Thanksgiving with Dante Falconeri (Dominic Zamprogna) since it’s their first one as an item.

Curtis Ashford (Donnell Turner) will also confess to Portia Robinson (Brook Kerr) that his “dead” father showed up out of the blue, so she’ll hear all about his encounter with Marshall Ashford (Robert Gossett).

Back with Brook Lynn, she’ll try to sell Ned Quartermaine (Wally Kurth) on the new paternity lie while Chase does the same with Hamilton Finn (Michael Easton).

However, viewers can expect a new episode to pick up where things left off on Monday, November 29. The week of November 29-December 3 will bring more shockers as the news of Jason’s presumed death spreads.

Of course, there’ll also be some positive updates since Drew’s headed home.

Sam will be an emotional wreck as she prepares to reunite one of her children with her father and deliver a crushing blow to another.

Scout Cain (Ella Ramacieri) is getting her daddy back, but Danny Morgan (Porter Fasullo) will be losing his own dad all over again.

Sonny will get an unsettling call before he reaches out to Damian Spinelli (Bradford Anderson) for help, so it sounds like he’ll learn Jason was lost in the rubble and hold out hope that Spinelli can pitch in.

Sonny won’t want to believe Jason is gone for good, but he may have to face his grief when Jason doesn’t turn up.

Carly will eventually face off with Britt, who may be on the receiving end of Carly’s blame.

Later, Sonny and Carly will reconvene following a difficult night. They might take a breather together as they discuss Jason’s fatal outcome and how they’re struggling to cope.

There’ll be more Thanksgiving celebrations including one featuring Portia and some friends. Marshall will corner TJ Ashford (Tajh Bellow) at GH, so Curtis certainly isn’t going to be happy if he finds out!

Alexis Davis (Nancy Lee Grahn) will host a Thanksgiving feast of her own, but the evening will take an intriguing turn.

It’ll lead to Alexis considering her future and a brand-new career path, so it’s good to know she’ll be finding a way forward.

Valentin will confide his heartbreak to Anna once she’s back in Port Charles.

Valentin will work on finding closure while Maxie Jones (Kirsten Storms) gets reassurance from Chase and Brook Lynn that they’ll keep Louise safe.

Unfortunately, Maxie will discover someone surprising soon after, so that could point to Peter finally showing back up in Port Charles. Over with Brando, he’ll get another round of fatherly advice from Sonny.

That suggests Brando’s baby will still be alive, but his son could still face some lingering medical conditions.

Brando and Nina will want to help Sasha as she struggles, so this baby may not be out of the woods yet.

Finally, Carly will get uncomfortable at the sight of something.

That probably means Carly will witness a moment between Sonny and Nina that’s too close for comfort, so she may worry they were more than just friends in Nixon Falls!