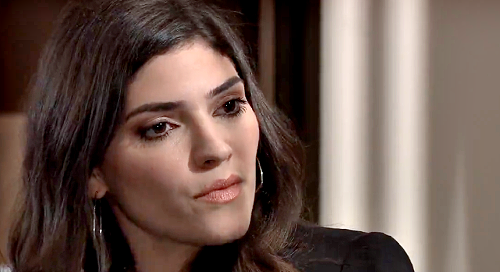 General Hospital (GH) spoilers tease that Harrison Chase (Josh Swickard) and Brook Lynn Quartermaine (Amanda Setton) may face a sizzling surrender. Moving in together will change everything and may leave the two of them powerless to fight temptation.

Brook Lynn and Chase’s feelings for each other have been growing steadily, especially after that awkward yet enjoyable steam room situation.

Chase’s towel drop gave Brook Lynn a little taste of what she’d be getting if she fell into bed with him – and she no doubt liked what she saw!

Even so, Brook Lynn has been keeping her guard up for the most part. She has moments where that guard slips, but she’s also trying to maintain some boundaries and avoid complicating this arrangement.

Of course, the heart wants what it wants – and Brook Lynn’s heart obviously wants Chase.

Likewise, Chase’s heart wants Brook Lynn, so what are they waiting for? They may end up asking themselves that after a bold move leaves them in somewhat close quarters.

Tracy Quartermaine (Jane Elliot) wanted Brook Lynn to move to Amsterdam with the baby, which wasn’t a feasible solution since Maxie Jones (Kirsten Storms) wouldn’t want her daughter on the other side of the world.

It might be the safest hiding spot for Louise August aka “Bailey Quartermain” (London and Jett Prinzo-Berendt), but that kind of separation would be downright unbearable for Maxie.

That’s why Chase and Brook Lynn worked out this plan of getting a new place together closer to home.

Shortly after moving in with Chase, GH spoilers say Brook Lynn will catch him in a compromising situation.

Maybe Brook Lynn will spot Chase coming out of the shower or something along those lines.

No matter how exactly this plays out, it seems likely Chase is going to be half-naked and looking like a fine specimen for Brook Lynn to pounce on.

Brook Lynn and Chase controlled themselves in the steam room, but will they be able to do that in the privacy of their brand-new home?

This could be the moment when Chase and Brook Lynn finally throw caution to the wind.

Brook Lynn and Chase might surrender to what they’re feeling and hit the sheets, so that could certainly be a game-changer when it comes to this fake family they’ve created for the sake of Maxie’s little girl.

General Hospital spoilers say some exciting stuff’s ahead as the baby drama continues, so stay tuned!