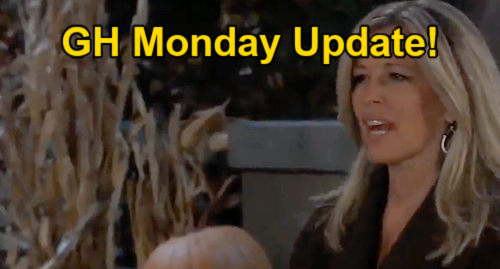 At GH, Brando Corbin’s (Johnny Wactor) concern for his newborn son will shift to even more concern for Sasha Gilmore (Sofia Mattsson).

Dr. Sofia Navarro (Christine Ferraro) seemed worried about the risk to Sasha before the C-section began, but now Brando’s worst fears will be coming true. He’ll have to fret over the possibility that he could lose both Sasha and their child.

Brando will freak after Sasha loses consciousness on the operating table. There’ll be a scary hemorrhaging crisis, but Sasha’s medical team will save her life.

As for Brando and Sasha’s baby boy, his future isn’t as certain. The baby will survive for a while, but that doesn’t necessarily mean he’ll stick around for a long and happy life.

Maxie will comfort Brando and feel the need to check on her own kids over the phone. This will serve as a reminder of how precious life is and make Maxie grateful for her little ones.

Of course, that includes Louise August aka “Bailey Quartermaine” (Harper and Scarlett Bloom) – and Harrison Chase (Josh Swickard) will do his part to make sure she stays safe.

Chase will lie that got a DNA test done that proves “Bailey” is his, so he’ll pretend he’s disgusted with Brook Lynn for lying.

Valentin Cassadine (James Patrick Stuart) will be skeptical, but Chase will insist he had his suspicions and followed up on his hunch.

Chase will tell Brook Lynn he’ll never forgive her for this, so BLQ’s head will be spinning as she tries to process everything that’s happening.

Next, Jax will shock Carly with a decision he’s made. Carly will find out that Jax is leaving Port Charles behind, so perhaps he’s headed back to Australia now that Josslyn Jacks (Eden McCoy) is in college.

Jax may not think he’s needed around there anymore, especially now that Sonny Corinthos (Maurice Benard) is back.

Things are over for good between Jax and Nina Reeves (Cynthia Watros), so Jax may argue that it’s time to hit the road.

There could also be some specific business reason that adds to Jax’s desire to leave right away. Regardless, Ingo Rademacher will exit the show after Jax tells Carly goodbye.

During a conversation with Sonny Corinthos (Maurice Benard), Nina will likely share her concerns about Sasha and the baby. She may admit that even though Sasha lied to her, that doesn’t erase the mother-daughter-ish bond they once had.

That’s a situation Sonny can understand all too well! Sonny certainly can’t forget how he felt about Nina in the not-so-distant past.

Nina will remain apologetic for keeping Sonny all to herself in Nixon Falls, but she’ll tear up and talk about how she didn’t have the strength to let their romance go.

On Cassadine Island, Robert will be armed and dangerous when he arrives on the compound – ready to shoot for any reason!

Anna Devane (Finola Hughes) will accompany Robert, so they’ll follow the clues and perhaps pry some info out of a stray guard.

One way or another, Anna and Robert should realize some serious tunnel drama has gone down.

Thanks to the cave-in, Britt will be unconscious along with Liesl and Drew. They’ll all wake up eventually, so that’ll leave Britt eager to get Jason out of the area he’s trapped in.

Drew will probably convince Britt and Obrecht to get to safety instead, but he may try to reach his twin brother. Alas, Jason is poised to remain stuck in the rubble and should be presumed ᴅᴇᴀᴅ by the end of Monday’s shocking episode.

As for Peter August (Wes Ramsey), he’ll live to tell the tale and will head for Port Charles sooner or later.

General Hospital spoilers say Peter will keep fighting for a reunion with Maxie and Louise, so stay tuned for more chaos.