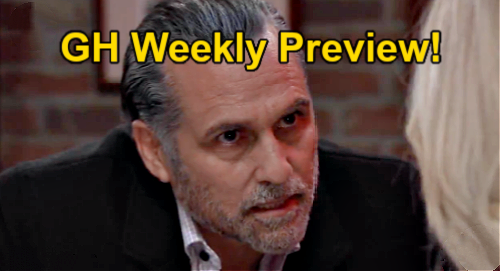 General Hospital spoilers reveal that the preview for the week of November 22 teases that the characters will face harsh truths and experience tragic fallout. Sonny Corinthos (Maurice Benard) gives a brutal reality check to Nina Reeves (Cynthia Watros) while we see who survived on Cassadine Island.

GH spoilers reveal that Sonny has a serious talk with Nina, which has to do with the truth about their relationship in Nixon Falls. Nina’s face is full of hope until she hears what Sonny has to say.

Nina’s face falls when Sonny tells her that what they had in Nixon Falls wasn’t love, but a lie.

As for Brook Lynn Quartermaine (Amanda Setton), she will face the consequences. Harrison Chase (Josh Swickard) swooped in and saved her and Maxie Jones’ (Kirsten Storms) secret about Bailey Quartermaine (Harper and Scarlett Bloom).

However, in the preview, Chase is furious and makes it clear to Brook Lynn that he will never forgive her for what she’s done – of course this is all part of a con that BLQ is only just realizing is taking place!

General Hospital spoilers reveal that Sasha Gilmore (Sofia Mattsson) and Brando Corbin (Johnny Wactor) were supposed to be experiencing the joy of becoming parents. Instead, there was a delivery emergency, which led to Sasha undergoing a C-section.

Once the baby was born, he was whisked away by doctors and no crying was heard. Sasha and Brando ask the doctor to tell them what’s wrong with their baby in the preview.

Will their baby be okay or could they face a tragic loss? GH spoilers indicate Sonny will be giving Brando advice about how to be a father so we expect the baby to make it.

It appears that Britt Westbourne (Kelly Thiebaud) survives the unexpected accident on Cassadine Island. However, someone does remove a rock from her head. So, her injuries are quite serious.

Britt opens her eyes and calls out Jason Morgan’s (Steve Burton) name. However, it isn’t really Jason that is helping her – rather she’s crying out to see if he survived.

What about Liesl Obrecht (Kathleen Gati), Drew Cain (Cameron Mathison) and Peter August (Wes Ramsey)? What does the future hold for them?

Let us know what you think of the events played out in the preview for the week of November 22. What do you think happens and which characters will we lose?