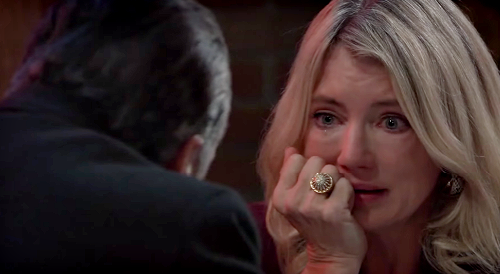 Carly already had a problem with Sonny rushing to Nina’s defense and grew concerned when he opened up about Nina’s friendship during his time away.

Sonny tried to backtrack, but Carly is clearly becoming uneasy over his lingering connection to Nina and wondering just how close they got during their shared time away.

Carly should have even more concerns soon enough. GH spoilers say Nina and Sonny will be drawn to each other even more for a variety of reasons.

Nina will want to help Sasha Gilmore (Sofia Mattsson) as she copes with her latest baby issues – and Sonny will want to be there for Brando, too.

Nina knows how close Sonny and Jason were, so her heart will go out to him. There’ll be some great reasons for Nina and Sonny to bond all over again during the week of November 29-December 3.

However, that could also lead to more chances for Carly to catch on. Carly isn’t aware that Sonny kissed Nina multiple times and nearly slept with her.

Carly also doesn’t realize Sonny and Nina declared love for each other in Nixon Falls, but she could battle intensifying fears after what she witnesses on the December 3 episode.

That’s when Carly will spot something that leaves her feeling rattled, so there’s a good chance it’ll involve Sonny and Nina.

Carly will deal with this unsettled feeling in the aftermath of whatever she witnesses and may call Sonny out after a comforting embrace with the enemy!

If Carly flat-out asks if Sonny was in love with Nina in Nixon Falls, she may not like the honest answer she receives.

No matter how all this plays out, Carly’s going to face another heartbreaking, infuriating shocker.