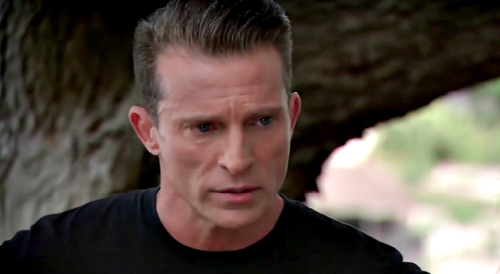 General Hospital (GH) spoilers reveal that Steve Burton (Jason Morgan) is open to new opportunities after GH, so is ex-Jason going to another soap? There are other options to consider now that Burton has been fired due to his refusal to comply with the vaccine mandate at General Hospital.

In Burton’s video statement to fans, he confirmed he was forced out due to the show’s vaccine mandate. Burton added that his applications for medical and religious exemptions were denied, but he stood his ground since this was also about “personal freedom” to him.

Although Burton expressed his desire to return to GH if the vaccine mandate was no longer in effect someday, he’s currently looking forward to whatever other career opportunities land in his path.

Burton seems more focused on the future at this point – and that future could potentially involve landing at another daytime drama.

“I don’t think anybody should lose their livelihood over this,” Burton said. With that in mind, it makes sense that Burton might be interested in another stable job on a different soap without the same rules.

Burton could perhaps get his livelihood back through a similar gig on The Young and the Restless, The Bold and the Beautiful or Days of Our Lives. It’s at least worth mulling over now that Burton has wrapped his run as Jason Morgan.

We should mention that Burton played Dylan McAvoy on Y&R from 2013-2017. Dylan went into witness protection for his exit due to some danger he was facing, but it’d be easy to clear up the threat and send Dylan back to Genoa City.

However, there are other roles that could be written at B&B or Days if Burton landed at one of those soaps instead. It’s a matter of what they might need for future storylines and whether they can afford the salary Steve Burton demands.

Of course, there’s always the possibility other soaps will eventually follow suit when it comes to vaccine mandates, so that could create the same problem in the future if Burton hops to another one.

Whatever the case, Burton is staying optimistic about what’s next and will no doubt find work somewhere.