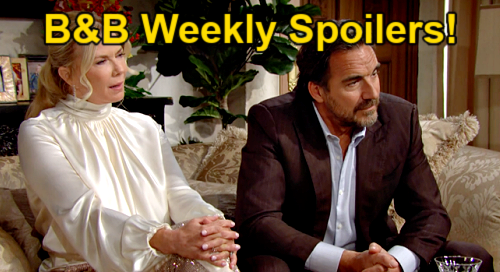 The Bold and the Beautiful (B&B) spoilers for the week of November 29-December 3 tease that Sheila Carter (Kimberlin Brown) will be in scrubs for John “Finn” Finnegan’s (Tanner Novlan) hospital surprise – and Brooke Forrester (Katherine Kelly Lang) will pick Deacon Sharpe (Sean Kanan) over Ridge Forrester (Thorsten Kaye) in a fight that’s brewing.

For starters, Deacon’s attempt to reach out again will infuriate Ridge.

While Ridge delivers a fierce warning, Steffy Forrester (Jacqueline MacInnes Wood) and Liam Spencer (Scott Clifton) will have a strategy session as they discuss how to keep Deacon from tightening his grip on Hope Spencer (Annika Noelle).

However, Hope will end up hurling a stunning accusation at Steffy soon after.

Since Liam is usually at the center of their issues, Hope might accuse Steffy of using this opportunity to keep Liam close. Perhaps Hope will rant about Steffy and Liam ganging up on her and blame it partially on their old connection.

B&B spoilers say Brooke will eventually decide to take matters into her own hands.

As everything descends into chaos, Brooke will shock everyone with a major outburst and take steps to handle the escalating Deacon conflict.

Of course, that’ll leave Brooke feeling stuck in the middle of Deacon and Ridge’s feud.

Ridge will make a passionate profession of love and assure Brooke that protection is his only goal. He’ll once again explain why Deacon needs to be banned from the premises and all their lives.

Nevertheless, Brooke will realize she could alienate Hope and do real damage to their relationship if she stands with Ridge on this.

It looks like Brooke will stand her ground and support Hope’s right to have Deacon in her life, so Ridge’s fury will explode all over again.

As Ridge gets pushed to his limit, Brooke will make a difficult choice.

All signs point to serious trouble for “Bridge,” so Brooke may hand down an ultimatum.

Maybe Brooke will argue that it’s her house and kick Ridge out if he doesn’t like the rules she’s establishing when it comes to Deacon.

In other words, Brooke may suggest a separation if Ridge can’t get on board with Deacon visiting her home and being part of Hope’s life.

As for Hope and Deacon, they’ll settle on a pact. No matter who stands against their relationship, Deacon and Hope may resolve to make the most of their chance to reconnect.

Over with Carter Walton (Lawrence Saint-Victor), he’ll head out to lunch with Paris Buckingham (Diamond White) at Ill Giardino.

That’ll lead to a conversation about love as well as a surprising realization for Carter.

Will Carter realize he has more than friendly feelings for Paris? Will Paris help Carter see what problems are holding him back in his love life instead?

Whatever the case, Paris and Carter seem to be spending a bit too much time together these days.

There’s the potential for temptation if this keeps up, so Carter and Paris’ bond is something to keep an eye on.

Next, Sheila will catch Finn off guard when she pays him a visit in his office.

Sheila will be wearing scrubs, so she’ll either use them as a sneaky way to score entrance or may reveal she got a new job working at the hospital.

Regardless, Sheila will push hard to get to know Finn, which will leave him increasingly torn.

Sheila may point out that she urged Jack Finnegan (Ted King) to come clean because Finn deserved the truth after all these years.

Sheila may play up the fact that Jack pressured her to give up Finn and try to tug at his heartstrings.

Finn made a firm commitment to Steffy when he vowed to stay away from Sheila, but that’ll become more and more difficult to do.

The Bold and the Beautiful spoilers say Sheila will do whatever it takes to make sure she’s close to Finn.