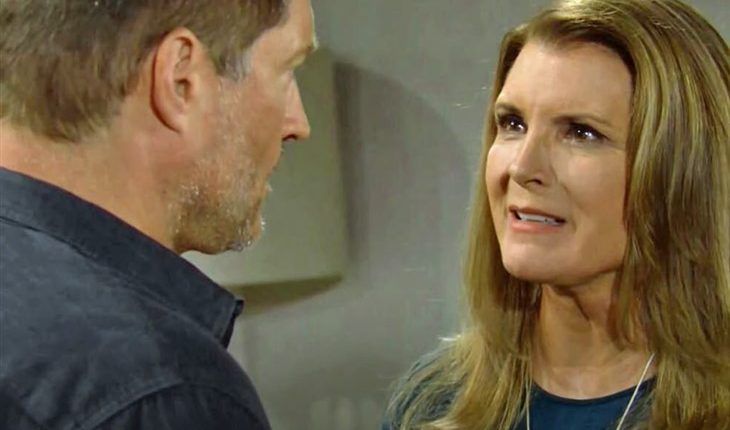 The Bold and the Beautiful (B&B) spoilers for the next two weeks, November 15 to November 26, tease that John “Finn” Finnegan (Tanner Novlan) will face paternity heartbreak since his dad is a liar – and Sheila Carter (Kimberlin Brown) will exploit some pain. There’ll also be some big Thanksgiving surprises, so let’s talk about what’s in store.

Brooke will insist that Eric and Donna belong together, so she’ll push Eric to dump Quinn Forrester (Rena Sofer) for good.

Afterward, Quinn will make an important admission to Eric that causes a huge shift in their relationship.

Eric will get total honesty and react to Quinn’s confession in a shocking way. That could mean Eric will finally have the bedroom breakthrough he’s been waiting for with Quinn.

Regardless, Quinn will stay busy with a new project involving Zende Forrester Dominguez (Delon de Metz) and a special present for Paris Buckingham (Diamond White). Zende will rely on Quinn’s expertise as he presumably seeks the perfect piece of jewelry to blow Paris away.

As for Carter Walton (Lawrence Saint-Victor), he’ll continue to flirt with Katie Logan (Heather Tom) and will let her know he’s ready for a new chapter.

When Katie realizes Carter views her as a potential part of that vision, she’ll feel both flattered and excited about the road ahead.

Carter will also end up walking in on an uncomfortable moment – one where Thomas Forrester (Matthew Atkinson) and Paris perhaps seem too close for comfort. It could leave Carter wondering what’s really going on behind closed doors.

Next, Thomas will move forward with a romantic setup that catches Paris off guard. Thomas will ultimately declare his feelings for Paris and push her to be with him instead of Zende, so that’ll be a lot for her to wrap her head around.

Over with Sheila, she’ll try to sell Jack Finnegan (Ted King) on the idea of coming clean to Finn and Li Finnegan (Naomi Matsuda).

Once Jack works up the nerve, he’ll drop the affair bomb and admit Sheila gave birth to his son.

Finn is Jack’s biological child with Sheila, so that’ll leave Li reeling and crushed. Li will force Jack to make the same confession to Finn a little later – and Steffy Forrester (Jacqueline MacInnes Wood) will be on hand to hear it.

During the week of November 22-26, B&B spoilers say Finn will struggle over the paternity news that Jack delivers.

It’ll turn Finn’s world upside down to think Jack covered up his affair and lied about being his adoptive dad instead of his biological father.

As for Sheila, she’ll find a way to spin a situation in her favor. Sheila will manipulate someone using their pain, so we’ll see if that’s Finn, Jack or even Li.

Deacon Sharpe (Sean Kanan) might also be an option since Sheila keeps trying to rope him into schemes.

Regardless, Sheila and Deacon will have some humorous fantasies as Thanksgiving approaches.

Deacon and Sheila will imagine what it’d be like to spend the holiday in a state of family bliss, so stay tuned for their idea of perfection.

We’ll deliver updates as other B&B details become available. The Bold and the Beautiful spoilers say Sheila and Deacon will hold out hope for the future, so stay tuned.