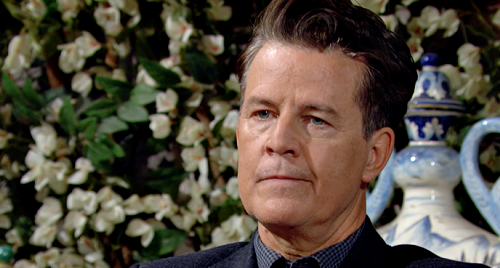 Sinn’s most recent conversation included Finn’s admission that he still had questions about his birth mother.

Steffy felt her husband should recognize why Sheila is not someone he can be connected to and that Finn should be satisfied his main childhood question, regarding his birth mother’s identity, has been answered.

A significant part of Finn’s childhood involved believing he had two adoptive parents. But as viewers have learned, Jack Finnegan (Ted King) did not adopt Finn. He did not have to since Novlan’s character is his genetic child.

Finn is still digesting that Jack withheld Sheila’s identity from him and his adopted mother, Li Finnegan (Naomi Matsuda).

Novlan’s character was speculating that Deacon Sharpe (Sean Kanan) might have been his biological father after witnessing the Shecon ruse at Il Giordino. But Sheila quickly told him that was not true.

Jack’s invitation to meet Sheila at that often-used outdoor dining setting was oh so California Dreamin’ (to quote a famous song title from the Mamas and the Papas).

How likely was it that Finn would just so happen to be headed there as well for a solo lunch? The odds were one-to-one on B&B.

Teasers indicate that Sheila’s push to have Jack admit the truth to Finn will result in a reveal. With it, Finn’s gut will be punched again.

Steffy splits her approach to Sheila. At times she boldly stands up to one of daytime drama’s greatest of all-time villains. At other moments Steffy is spooked by the sight of witchy Sheila and appears to fear her in-person presence.

Viewers anticipate that Steffy will not be shy about offering her take about Jack’s paternity tell. Will she tell Finn that he can not see his dad at that point in the plot?

The above question is not far-fetched because, by extension, Steffy could feel Jack also can not be trusted. Most likely she will advise extreme caution, which will serve as another cudgel.

Jack’s explanation was plausible when claiming that he did not know about Sheila’s history. He did not realize that she could have been a threat to Finn, Li, or himself.

Like Hope Spencer (Annika Noelle), Finn needs to make his own decisions about his parents. While Steffy’s Sheila-based demand is justified, whatever take she may offer on Jack will represent an opinion.

Finn is a grown man. He is married and has a son. This medical doctor also has two biological parents who have proven not to be ideal. Yet, blood is thicker than soapy water. So, great drama will continue on this iconic show.