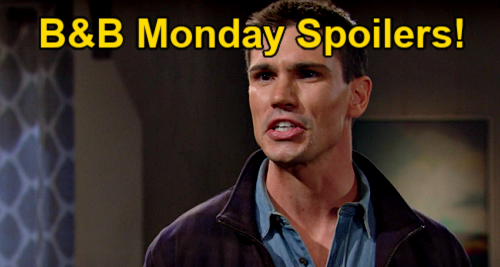 At the cliff house, Finn won’t be willing to give Jack the forgiveness he’s seeking. Now that Finn realizes Jack adopted his own biological son to cover up an affair, it’s changed his whole view of him.

Finn answered one of the biggest questions of his life, but now it’s like he doesn’t know his dad at all.

After Finn rips into Jack a bit more, he’ll most likely order his father to leave.

Jack may hope that they can find a way forward eventually, but Finn may not be so sure that’s possible.

It’ll definitely take some time and some serious work on Jack’s part before Finn can even think about giving him another chance.

For now, Finn will focus on comforting Li Finnegan (Naomi Matsuda) over the betrayal. He’ll want to be there for his adoptive mom and try to get through this together.

Steffy Forrester (Jacqueline MacInnes Wood) will do her part to console Finn, but she’ll worry Sheila Carter (Kimberlin Brown) could use this situation to her advantage.

Sheila will indeed exploit Jack’s sorrow later in the week, so Steffy’s instinct will be spot-on in this case.

In the meantime, B&B spoilers say Thomas will continue to open up about his feelings for Paris.

Thomas just admitted he’d like to be much more than friends, but Paris won’t give him the response he’s looking for. Paris won’t want to hurt Thomas, so she’ll no doubt try to let him down as gently as possible.

Paris is the first woman since Hope Spencer (Annika Noelle) that Thomas has really started to fall for, so it should sting when she turns him down.

Of course, Thomas has a history of not giving up when there’s something he wants, so he may hold out hope despite the pain of Paris’ rejection.

The Bold and the Beautiful spoilers say Thomas and Paris’ roommate situation will suddenly get even more complicated, so stay tuned.