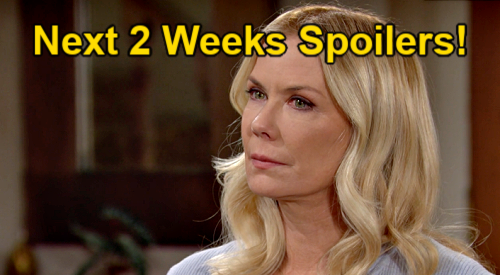 The Bold and the Beautiful (B&B) spoilers for the next two weeks, November 22 to December 3, tease that Brooke Forrester (Katherine Kelly Lang) will be torn between Deacon Sharpe (Sean Kanan) and Ridge Forrester (Thorsten Kaye) – and Sheila Carter (Kimberlin Brown) will target Jack Finnegan (Ted King). Carter Walton (Lawrence Saint-Victor) will also be moving on after some reflection, so here’s what viewers can expect.

During the week of November 22-26, John “Finn” Finnegan (Tanner Novlan) will continue to fume over Jack’s revelation that he’s Finn’s bio dad. Finn will refuse to forgive Jack and push his father away, so Jack will be down in the dumps.

Throw in Li Finnegan (Naomi Matsuda) shutting him out and that’ll really leave Jack in a vulnerable place.

Of course, Sheila Carter (Kimberlin Brown) is a master at pouncing on any opportunity that lands in her path. Sheila will make Jack her latest victim by using his pain to her advantage.

Meanwhile, Thomas Forrester (Matthew Atkinson) will pour his heart out as his confession continues.

Thomas will hope Paris Buckingham (Diamond White) will be his girlfriend by the end of all this, but he’ll get shot down in the end. Paris will stick with Zende Forrester Dominguez (Delon de Metz), so Thomas will be out of luck for now.

As for Paris, she’ll be rattled over Thomas’ admission and will turn to Carter for advice. Carter may think it’s wise to find a new living arrangement sooner rather than later!

Carter might also urge Paris to be honest with Zende about what happened, but she may feel like it’d be better not to spill and keep the peace between the cousins.

Whatever the case, Paris should score a lucky break as Thanksgiving gets underway. Thomas won’t be on the guest list according to B&B spoilers, so that should be a relief for Paris.

Brooke and Ridge will host the gathering while Sheila and Deacon fantasize over Chinese takeout.

Deacon and Sheila will mull over what their holiday might look like if the Forresters weren’t causing so many problems for them.

After a special Thanksgiving episode on Wednesday, November 24, fans will see a repeat on Thursday, November 25. That’ll be followed by a preemption on Friday, November 26, so keep these programming details in mind.

During the week of November 29-December 3, Hope and Deacon will strike a deal. They’ll come together for a pact that’ll no doubt worry Liam if he finds out. Liam will remain against Hope’s decision to open her heart to Deacon, so that’ll bring some issues in their marriage.

Deacon will create more drama in Brooke’s relationship with Ridge as well.

There’ll be some scenario that leaves Brooke caught in the middle of her current husband and her former flame. Brooke will feel stuck in this tricky Ridge and Deacon situation, but she’ll navigate it as best as she can.

Other Bold and the Beautiful spoilers say Carter will do some soul-searching. A new friendship will help Carter reflect, so that probably means Katie Logan (Heather Tom) will offer more pep talks and advice.

Paris is also a friend to Carter, but she’s not really a new one at this point. Katie, on the other hand, has only recently become a big part of Carter’s life.

As Carter and Katie’s bond grows stronger, they could inch into romantic territory.

B&B spoilers say there’ll be plenty of excitement over the next two weeks, so stay tuned.