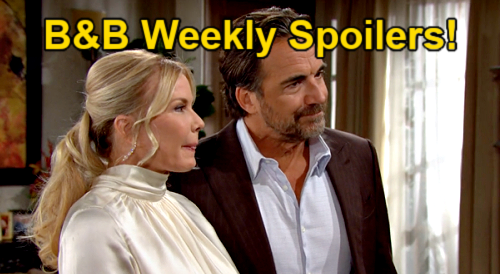 At home, Paris will hope to wiggle out of an awkward situation. After Thomas wraps up his latest confession, Paris will suggest friendship is all she’s looking for. Paris will no doubt think there’s a great woman out there for Thomas, but she’ll assure him that it’s not her.

Paris will want to stand by Zende Forrester Dominguez (Delon de Metz), so a disappointed Thomas may argue that he had to at least try.

However, Paris may have a hard time getting Thomas off her mind in the aftermath.

Thomas will still be Paris’ roommate until he can get a place of his own, so she can’t avoid running into him. It turns out there’ll be a shirtless encounter on Thomas’ end, so Paris may have to admit to herself that she enjoys the view.

Paris might even start doing some fantasizing since that’s what she did when she was living with John “Finn” Finnegan (Tanner Novlan) and Steffy Forrester (Jacqueline MacInnes Wood).

The more Finn paraded around shirtless, the steamier Paris’ thoughts got!

It’ll be interesting to see if Paris finds herself in a similar situation this time around. Regardless, Paris will be unsettled once she knows how Thomas really feels about her.

It’ll lead to Paris filling Carter Walton (Lawrence Saint-Victor) in on the drama and getting some guidance.

Carter will no doubt have a bad feeling about what could happen if this roommate thing lasts too long. He may advise Paris to focus on Zende and give Thomas a nudge to kick his house hunt in high gear.

As for whether Paris will tell Zende about Thomas’ making a play for her, she may want to avoid the topic to avoid sparking any jealousy. In the meantime, Jack Finnegan (Ted King) will likely land at the bar to drown his sorrows.

That could be where Sheila Carter (Kimberlin Brown) will catch up with Jack and use his sorrow to further her own agenda.

John “Finn” Finnegan (Tanner Novlan) will find himself thinking he was wrong to build Jack up as the perfect dad in his mind. Finn will also feel like Sheila can’t be so bad if she pushed Jack to tell him the truth.

Steffy Forrester (Jacqueline MacInnes Wood) won’t want Finn thinking any positive thoughts about Sheila at all, but she won’t be able to stop them from creeping in.

Over with Sheila again, she’ll welcome fellow outcast Deacon Sharpe (Sean Kanan) to her hotel room for some Chinese food and a Thanksgiving without their children.

Sheila will imagine a world where the Forresters couldn’t stop her from spending the holiday with Finn.

Deacon will also fantasize about being able to spend Thanksgiving with Hope Spencer (Annika Noelle), but he’ll be on his own with Sheila and takeout boxes this year.

Deacon and Sheila’s daydreams will be part of the special Thanksgiving episode of B&B on Wednesday, November 24, which is also when Brooke will take charge of a turkey dinner.

Brooke will host Thanksgiving at her house and will perhaps be glad Quinn Forrester (Rena Sofer) won’t be in attendance!

Hope will no doubt wish Deacon could be there, but Brooke may feel like that’s pushing it under the circumstances.

Brooke’s trying to support Hope’s desire to have her dad in her life, but she may remind Hope that a Thanksgiving visit would be too much, too soon.

That’ll certainly be the case as far as Ridge Forrester (Thorsten Kaye) is concerned. Ridge will host this dinner along with Brooke, so he’ll be glad both Deacon and Sheila are banned.

Brooke, Ridge, Carter, Zende, Paris, Steffy, Finn, Hope and Liam Spencer (Scott Clifton) will all gather around the table to give thanks this year.

The week will wind down with an encore episode of Finn and Steffy’s wedding day on Thursday, November 25, along with a college football preemption on Friday, November 26.

The Bold and the Beautiful spoilers say there’ll be some holiday fun in the week ahead, so stay tuned.