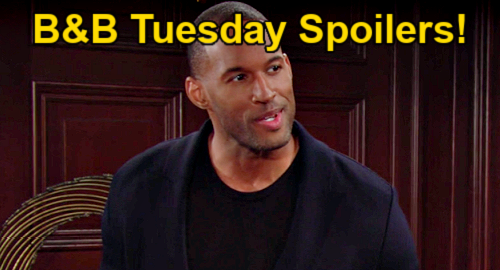 First on Tuesday’s B&B episode, Paris will decide she could use a confidant. Since Carter offered to be one not too long ago, Paris will take him up on the offer and drop quite a bomb.

Carter has already been a bit worried about the possibility of Thomas Forrester (Matthew Atkinson) making his move with Paris. Even so, it’ll come as a shock to learn Thomas surprised Paris with dinner and confessed his feelings.

Paris will assure Carter that she’s sticking with Zende Forrester Dominguez (Delon de Metz), but Carter may push Paris to explore what’s truly in her heart.

Carter might worry Paris is standing by Zende out of obligation or because it’d be too complicated to fall for his cousin now.

Carter knows a thing or two about complicated romances and the damage they can do, so may want to make sure Paris is genuinely all in on Zende before she goes any further.

There’s also the matter of whether Paris should come clean to Zende about Thomas’ confession.

Paris doesn’t plan to come clean, but Carter may have concerns about the deception. Nevertheless, Carter should be willing to keep this risky secret with Paris – one that’s bound to blow up sooner or later!

Thomas told Paris he would get a hotel room, but other B&B spoilers point to Paris walking in on him shirtless at some point in the coming episodes.

There could be one last awkward encounter before Thomas leaves the apartment and gets a suite elsewhere.

In the meantime, Sheila will realize she can use Jack’s agony to her advantage. Perhaps Sheila will stumble across Jack drinking at the bar and manipulate him to her way of thinking.

Sheila’s goal is to score a permanent place in John “Finn” Finnegan’s (Tanner Novlan) life, so maybe she’ll try to strike a deal with his dad.

Sheila might think they should work together so that they can both get a second chance – and Jack certainly needs one now that Finn has tossed him out.

Li Finnegan (Naomi Matsuda) isn’t sure she even wants to see Jack again, so he’ll be vulnerable to Sheila’s tactics.

Sheila may even start to envision her own future with Jack since they could form a happy family with Finn – at least in her eyes.

Regardless, Sheila will continue to scheme and bring more chaos to Los Angeles.

The Bold and the Beautiful spoilers say Sheila could make some progress with Finn down the road, so Steffy Forrester (Jacqueline MacInnes Wood) could have a bigger mess on her hands.