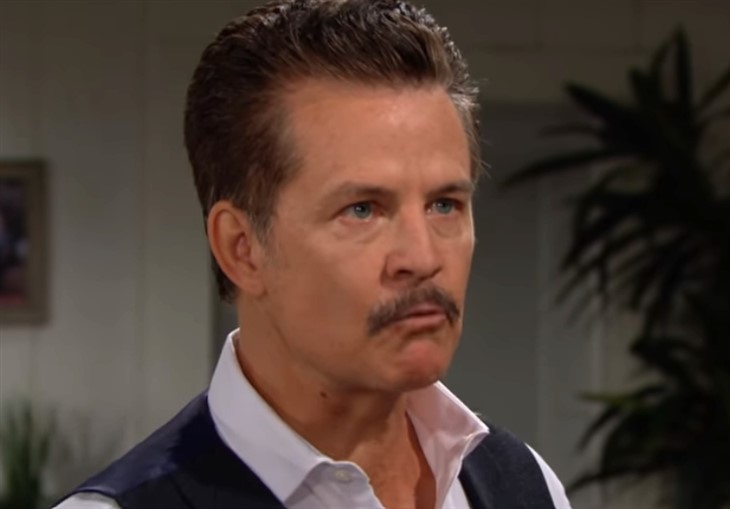 The Bold and the Beautiful spoilers for the week of November 15, 2021, suggest that the upcoming week will be a tough week for Jack. He will have to make a confession about Finn’s parentage and that will leave everything shaken up. Then, Brooke will come to know about Donna’s situation. So, she will take things into her own hands.

The upcoming week of The Bold and the Beautiful will be full of confessions. So, Carter will make a confession too. On the other end, Zende will reach out to Quinn and ask for help. This will have something to do with Paris. What could that be? Keep reading to find out.

Brooke Speaks To Eric
Starting off the week of November 15, 2021, The Bold and the Beautiful spoilers suggest that Brooke will come to know about everything that has happened with Donna, Eric, and Quinn in the past few days. Katie will tell Brooke about how Quinn issued Eric an ultimatum, and that led to Donna getting fired.

The Bold and the Beautiful spoilers suggest that after listening to all of this, Brooke will take things into her own hands. She will reach out to Eric and ask him to reverse his decision. She will even show him a list of how Donna is the right person for him and not Quinn. But, it looks like Eric will ask Brooke to back off and show some respect to his wife. Brooke might not be happy with this. So, we will have to wait to see what she does/says.

Speaking of Quinn and Eric, The Bold and the Beautiful spoilers suggest that they will start facing more issues in their marriage. She will make an admission to her husband this week. But what would this be about? Some speculations suggest that this could be about her ex-lover Carter and this will change everything in her relationship with Eric.

The Bold And The Beautiful: Carter Makes A Confession
It looks like this is the season of confessions. So, in the upcoming week of November 15, 2021, Carter will have a confession of his own. B&B viewers know that Carter himself has been trying to move on from Quinn. So, he might tell Katie about the future he is looking forward to.

Fame10 suggests that Katie will be touched when she hears everything that Carter has to say. She is trying to move on after she failed relationship with Bill. So, it is possible that the two of them might decide to move forward together.

Zende Needs Advice
On the other end of the town, Zende will reach out to Quinn and ask for some help. The Bold and the Beautiful spoilers suggest that he will want her to help him craft a special gift for his girlfriend. As the rumor has it, Zende will want Quinn to help him design a ring. Paris and Zende have gotten closer in the past weeks. So, could Zende be planning to propose to his girlfriend? Only time will tell.

More related spoilers suggest that while Zende and Paris will be enjoying this closeness that the two of them have been developing, Things won’t be all happy for very long. Thomas might get between the two of them. If the latest spoilers are to be believed, Thomas has started developing feelings for Paris too, and he will act on them in the upcoming days.

He will make a decision and surprise Paris. It looks like when Paris arrives in the apartment, she will find Thomas and the romantic dinner he has arranged for them. It will be interesting to see how Paris deals with this new development.

The Bold And The Beautiful: Jack Is On The Spot
B&B spoilers confirm that Jack will be on the spot in the upcoming days. Sheila will insist that he tells his wife and son the truth about Finn’s parentage. Jack might not be too excited about it. But, the latest spoilers suggest that Sheila will soon go from pleading to demanding, and Jack will have to surrender. He will then own to the truth and go speak about it to his family.

The Bold and the Beautiful spoilers suggest that Jack will tell his wife the truth about Finn’s true parentage. Jack will tell Li that he had an affair with Sheila all those years ago. They slept together, and Sheila ended up pregnant. Jack might make an excuse that Li was working long hours and he didn’t get to see her. So, he did what he did.

Then he will point out that Sheila couldn’t raise Finn, and Jack-Li couldn’t have a child of their own. So, adopting Finn seemed like the best solution. But, more spoilers suggest that Jack will also tell Li that Finn is his biological child, and this will send the woman in shock.

As per the spoilers, Li will put Jack on the spot between Steffy and Finn. She will ask Finn if he wants to know the truth about who his birth father is? B&B viewers would know that Finn recently came to know that Sheila is his birth mother. So, Li will want to know if Finn wants details of his other parent too.

After this, Li might start to pressure Jack into telling Finn the truth about his father. Would he be able to do so? How will things roll out there? We will have to wait to know.