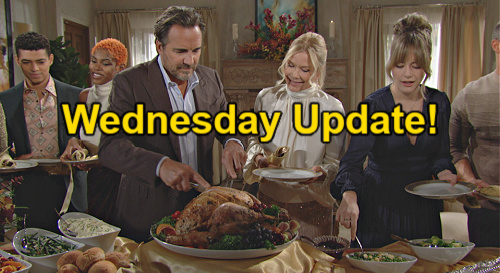 The Bold and the Beautiful (B&B) spoilers update for Wednesday, November 24, teases that Hope Spencer’s (Annika Noelle) daddy drama will erupt at the Thanksgiving party after Brooke Forrester (Katherine Kelly Lang) gets an uninvited guest. Some holiday chaos is on the way, so let’s discuss all the brewing excitement.

First on Wednesday’s B&B special, Brooke and Ridge Forrester (Thorsten Kaye) will put out a traditional Thanksgiving spread of turkey and all the trimmings. There’ll be a rather odd gelatin dish thrown in the mix, but most of the table’s offerings will look and taste delicious.

Steffy Forrester (Jacqueline MacInnes Wood) will joke around with Carter Walton (Lawrence Saint-Victor) as they get in the holiday spirit.

John “Finn” Finnegan (Tanner Novlan) should appreciate this chance to take a breather from his own family issues since he knows Jack Finnegan (Ted King) has been lying to him for decades.

Hope and Liam Spencer (Scott Clifton) will round out the guest list, but Hope may wish her father could be there to celebrate with her.

Deacon Sharpe (Sean Kanan) will certainly wish that as well, but Sheila Carter (Kimberlin Brown) will point out that his wishes could come true if he’d play a little dirtier and try a little harder.

Over Chinese takeout and booze, Sheila and Deacon will mull over their less-than-ideal situations.

They’d both like to be in the lives of their kids and grandkids, but there are some big hurdles preventing family bonds from forming.

Sheila mostly blames Steffy and the Forresters, but she’ll have a fantasy on Wednesday where no one’s interfering in an amazing Thanksgiving celebration with Finn. Likewise, Deacon will use his imagination to conjure up some sweet father-daughter moments with Hope.

Deacon may imagine being able to override a grumbling Ridge and Liam through Hope and Brooke’s approval.

Once this fantasy goes well, Sheila may urge Deacon to head over to Brooke’s place and recreate it. She might think Deacon needs to start taking charge, but things could take a disastrous turn.

Ridge’s fury is set to explode over Deacon’s impending arrival, so the mayhem may kick off on Wednesday and carry over in Monday’s upcoming episode, November 29.

The Bold and the Beautiful spoilers say Deacon will stir up trouble one way or another, so keep watching!